A lover of stories

Animations, installations and works on panel – all her work, says artist Pamela Phatsimo Sunstrum, is an extension of her ‘drawing language’.

Who are these figures that, displaced from any fixed sense of place and time, perform intriguing bodily movements and gestures, the significance of which can only be imagined? A figure cradles something in an arm – a mass composed of angular, uneven shapes that some may connect to other works within Pamela Phatsimo Sunstrum’s oeuvre.

The relationship between skin, clothing or even an abstracted visual vocabulary of substances aligned to the natural world (earth, sky or water) are ambiguous in her work. Sunstrum’s art-making enters into rich dialogues with mythological, literary, cinematic, art-historical and scientific narratives. The relationship between the female body, the natural world and the idea of landscape is paramount in her work.

Each of us will, of course, interpret the work from the basis of our own social and cultural reference points. These may traverse multiple geographical and historical sites, and cross time zones and hemispheres.

Of her interest in the relationship between human figures and mountains, Sunstrum says, ‘For me it’s important, in thinking about the process of looking at the figures and the landscapes, that they suggest or insist on some kind of meaning and some kind of specificity but, at the same time, I allow for meaning to be filled in. Certainly, there are a lot of references in my work and I’m interested in 18th-century philosophers and notions of the sublime. There’s something about a mountain and the act of experiencing it with your body that makes you understand your smallness. The beauty of these epic landscapes is a reminder of our fragile existence.’

Sunstrum may speak of fragility and yet in her works the figures emerge from the earth as presences that are aligned, throughout the history of humanity, with notions of fertility, birth and (in a more abstract and philosophical sense) creativity.

Process and medium are closely related in Sunstrum’s work. Her drawings and mixed-media works explore a range of media including pencil, ink, watercolour, gold leaf and gouache; they encompass works on paper and wood panel.

When she begins thinking about a work, she says, she almost always begins with drawing. Within the artist’s studio, drawing may function as a ritual that initiates processes of exploration and experimentation.

When she first began to pursue art-making, however, she began with a practice of writing. ‘I would give myself a few minutes just to write ideas – or no ideas. It was an act of putting pen and pencil to paper and letting ideas and thoughts come out. This was just a tool I used to get over that fear you feel every time you step into the studio.’ 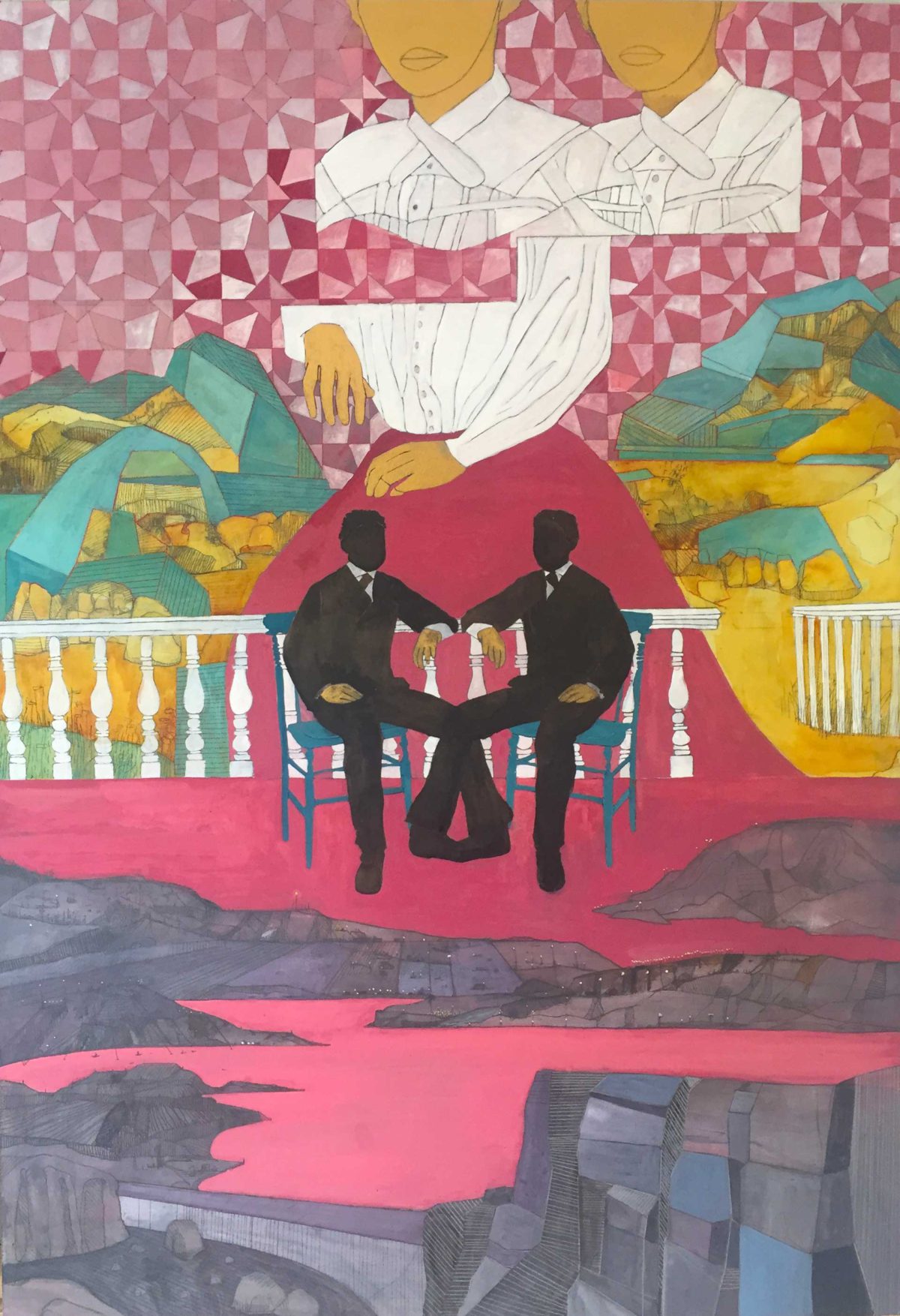 She recalls how she began to talk to a mentor about her writing process and he told her, ‘Well, writing is useful, and I can see how that’s useful to you, but have you thought about incorporating a daily drawing practice?’

Sunstrum brought this suggestion to her art-making. ‘I still do a lot of writing. I also read. And I think that’s where a lot of the mythological and scientific references feed into the work. But making a drawing every day, whatever form that takes, is really at the heart of my practice. Even though work starts to take other forms, for example, the animations, installations and works on panel, I still think of all the work as an extension of this drawing language.’ She adds, ‘In thinking about how drawing came out of the writing, I realise that I’ve always been a lover of stories. The kinds of stories that I’ve always loved have been our common myths. Throughout the world and throughout time we all seem to have this interest in heroes or heroines, and the quests that these figures embark on. 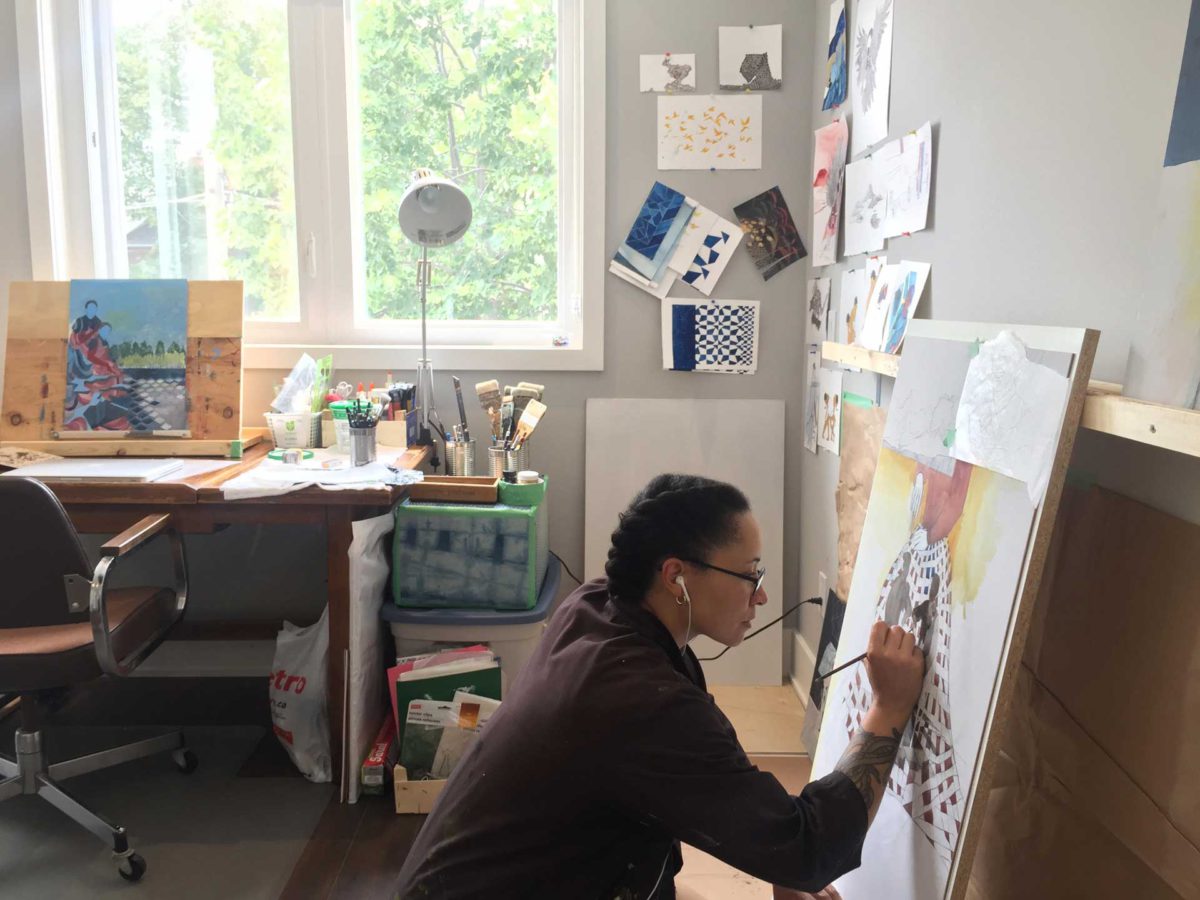 Pamela Phatsimo Sunstrum in her studio.

‘We can also imagine ourselves as heroes or heroines, and our own experiences as filled with meaning. I started to allow my work to be a place for developing these stories.’ 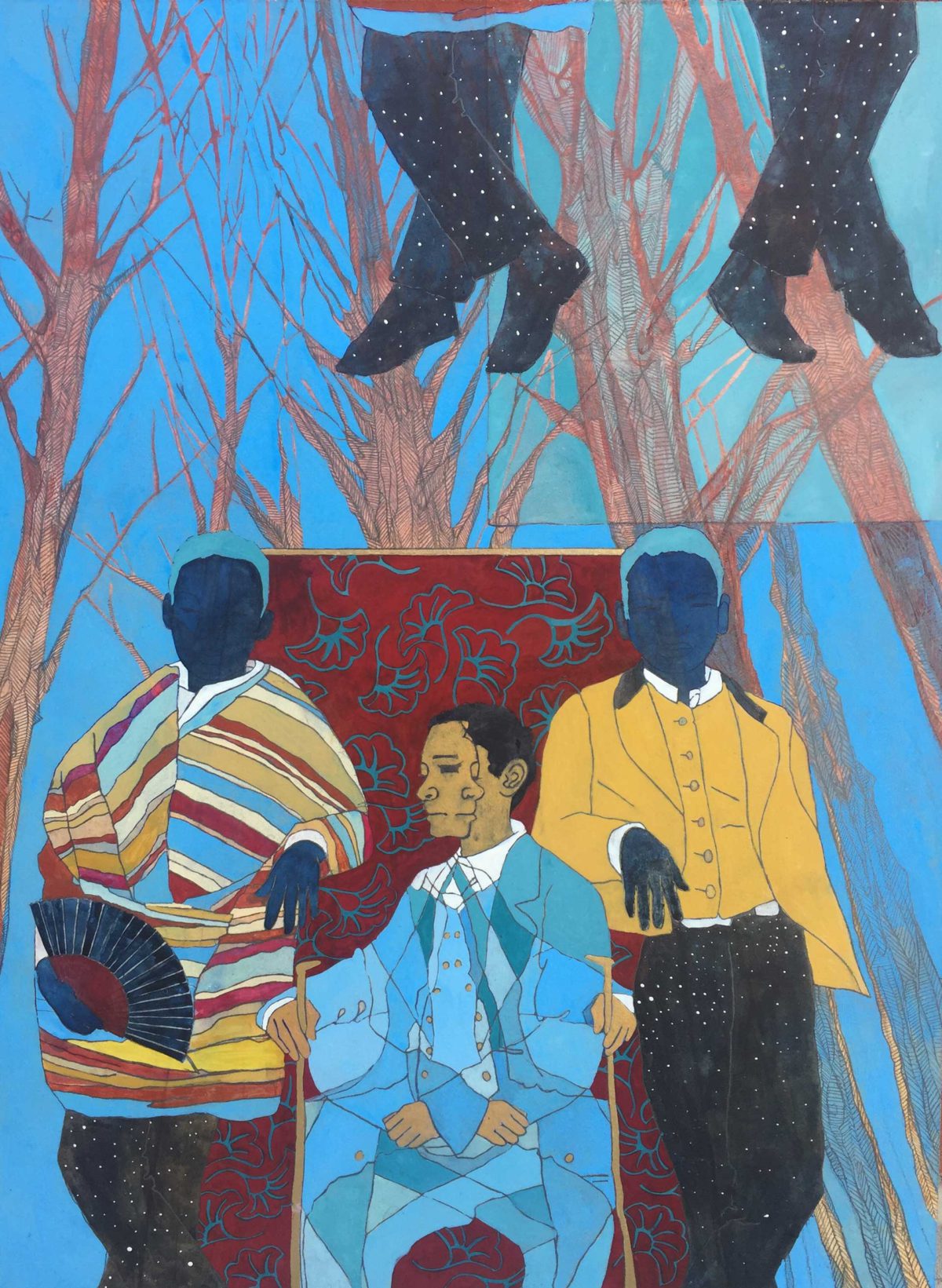 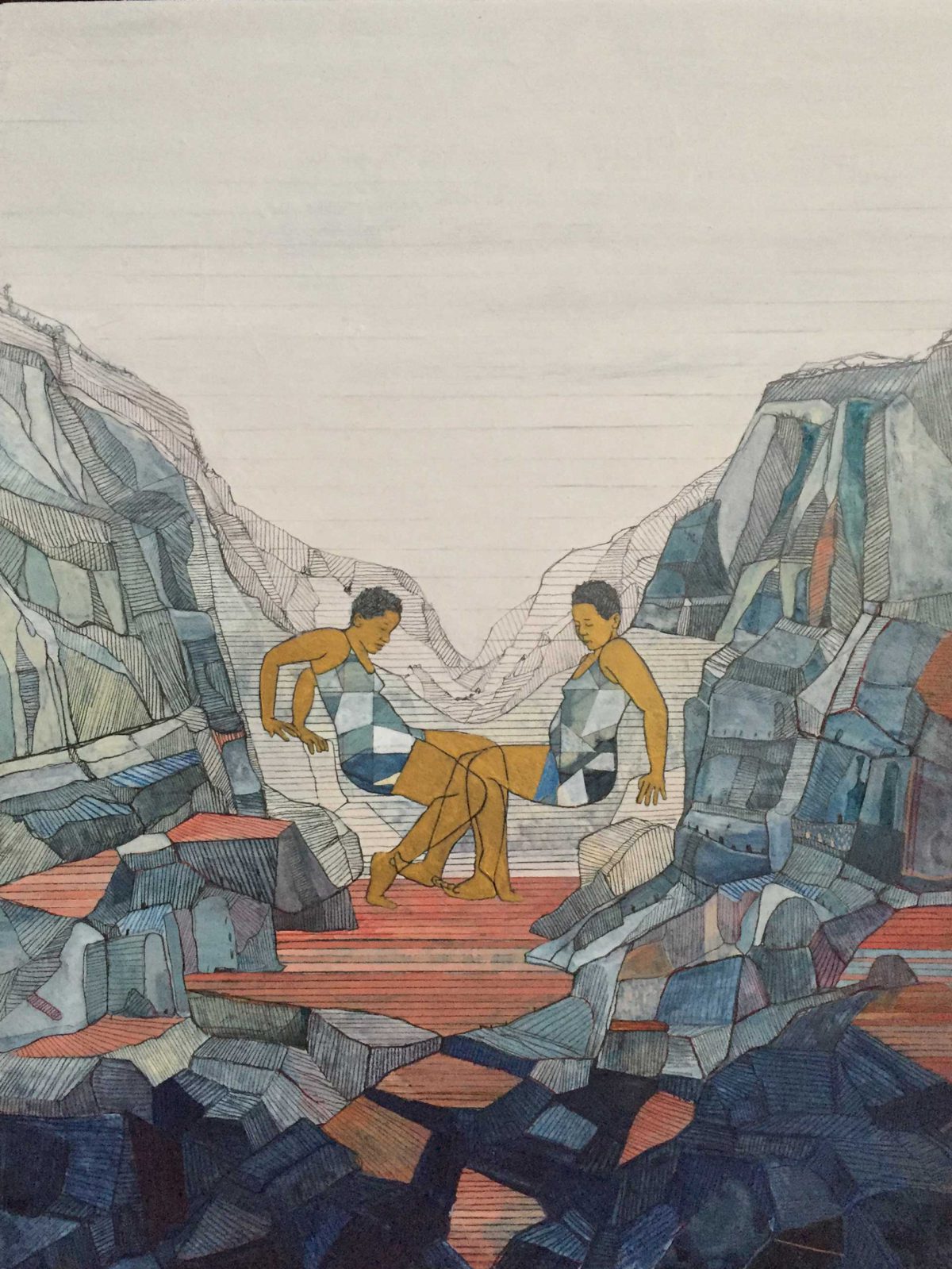 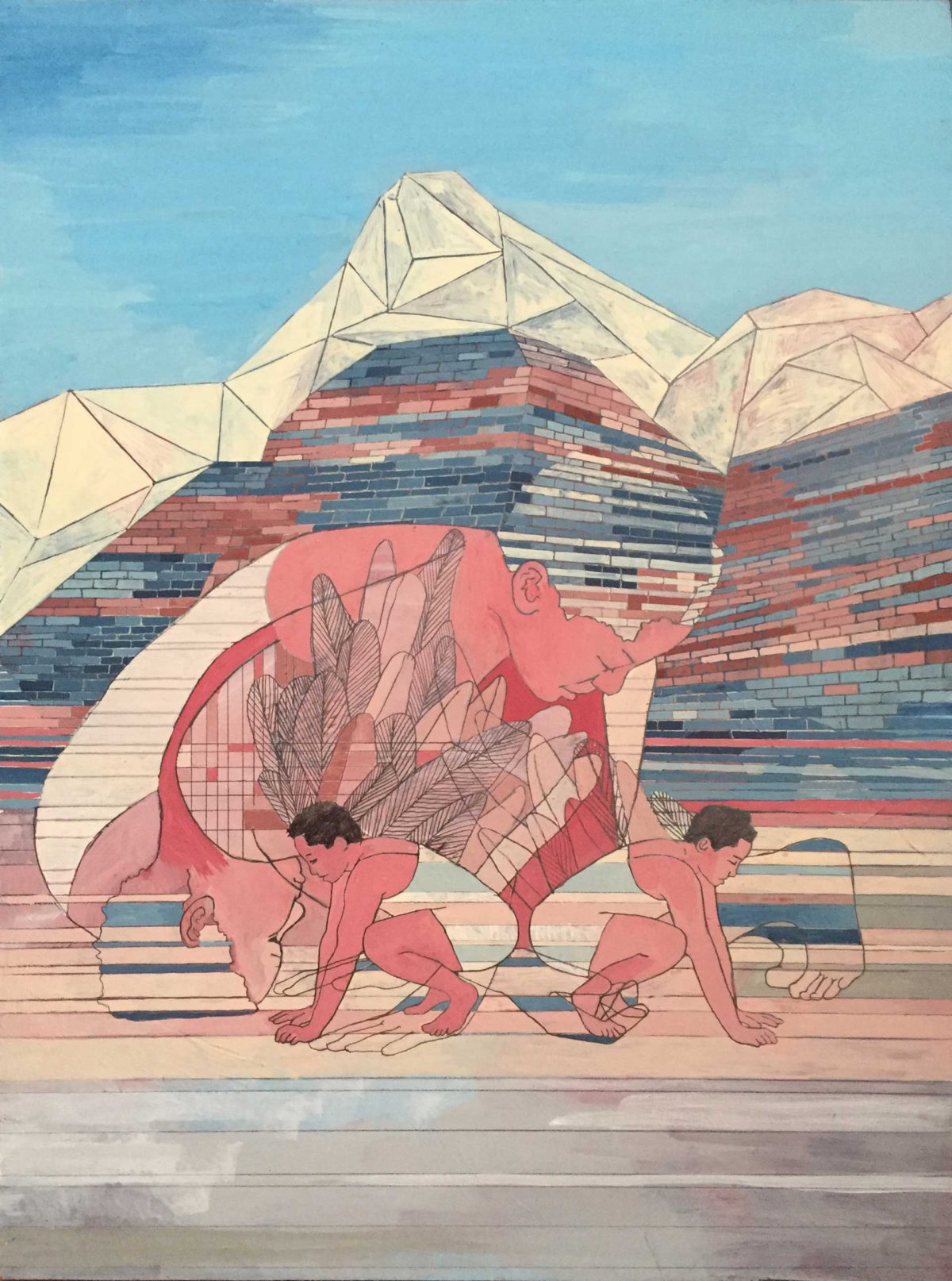 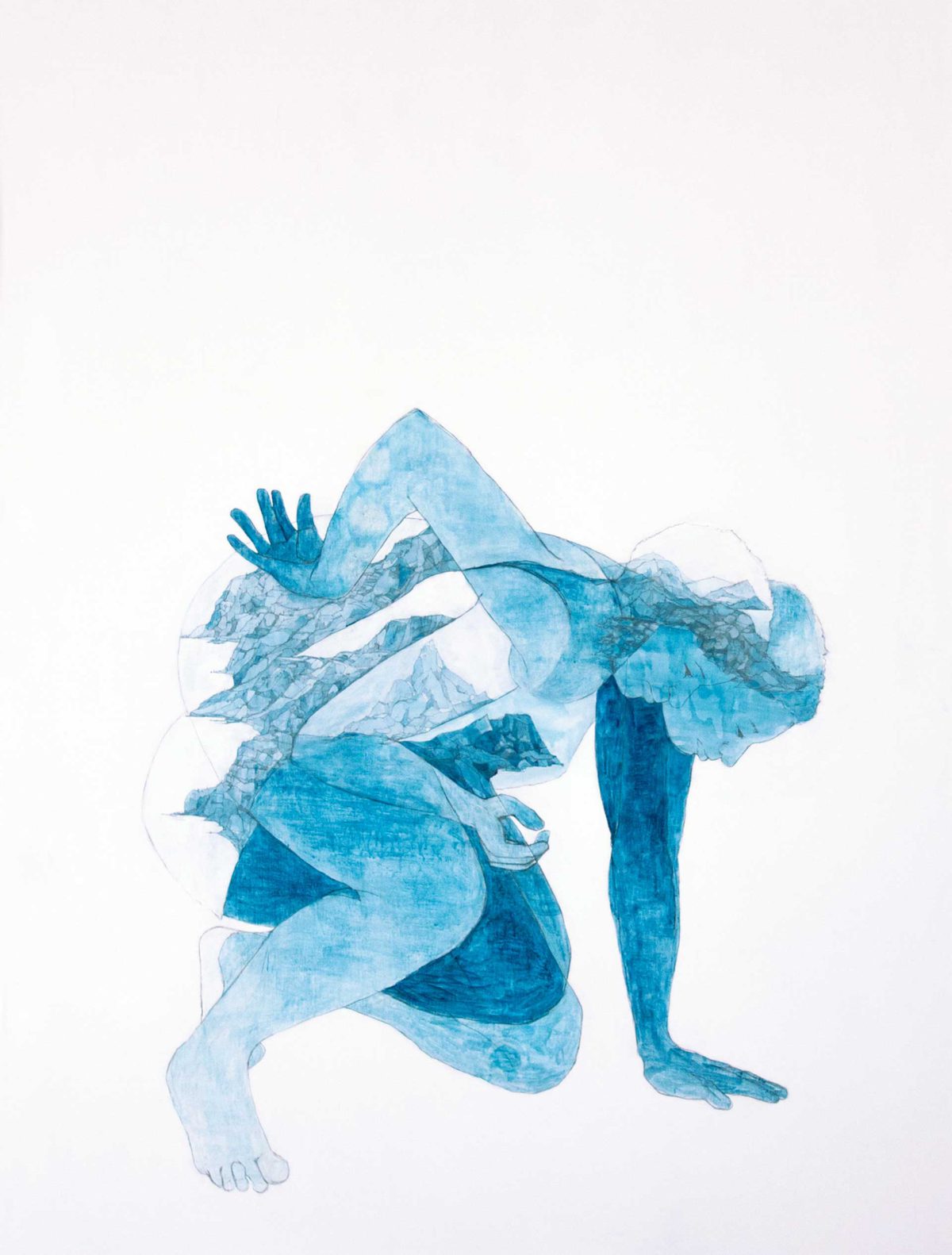 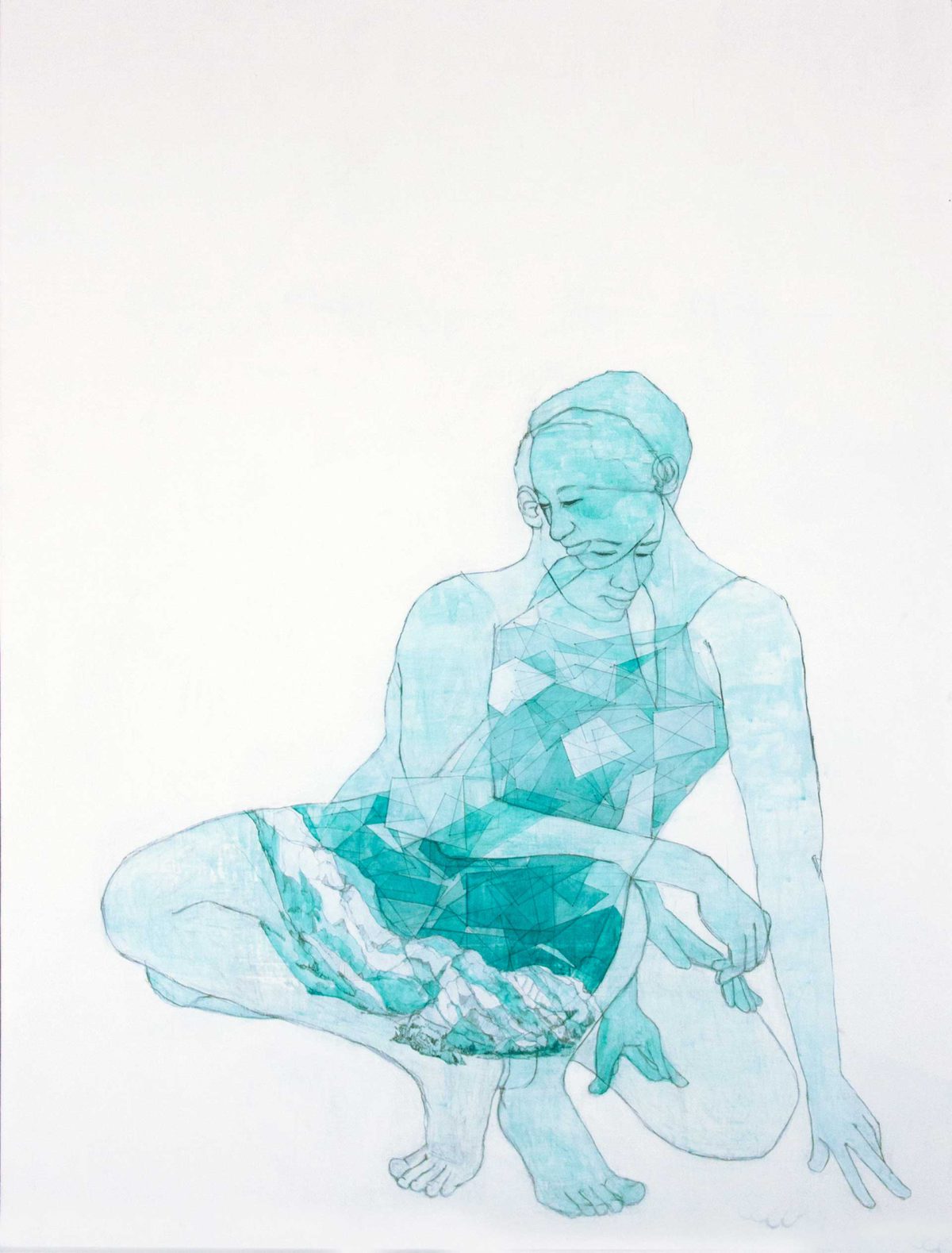